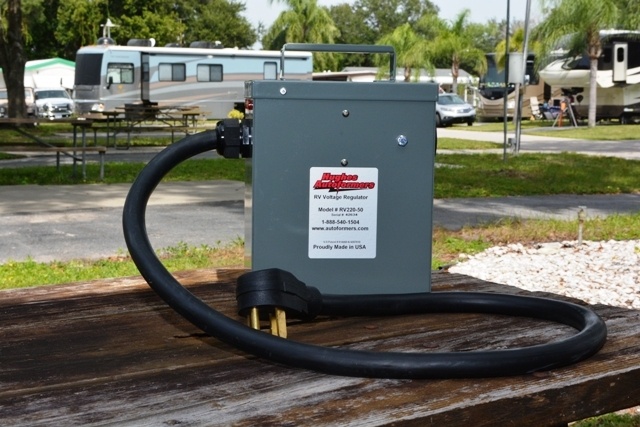 Hughes Autoformer is designed to protect the the sensitive electronic equipment installed in many modern RVs, whether it is high definition TV screens or complex computer-controlled system monitors.

In America, all of them are designed to operate on 120-vot systems.

Even appliances like air conditioners and water pumps can be damaged by an unexpected electrical surge that can cause havoc on the equipment, often rendering the devices worthless.

Some parks set up utility poles on a chain, which means that a problem with an RV a few sites away can can certainly impact other RVs hooked up to that same power chain.

As people plug in and unplug, or turn appliances on and off, the amount of power available on the system can fluctuate.

If one RV pulls too much power, it can reduce the amount of power available to other RVs connected to the same system.

A low voltage situation is just as destructive to on-board electronics as a power surge.

RV owners have the ability to protect themselves and their RVs by using a Hughes Autoformer. 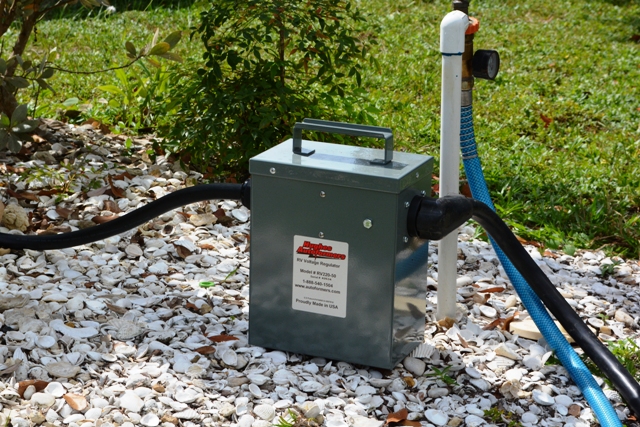 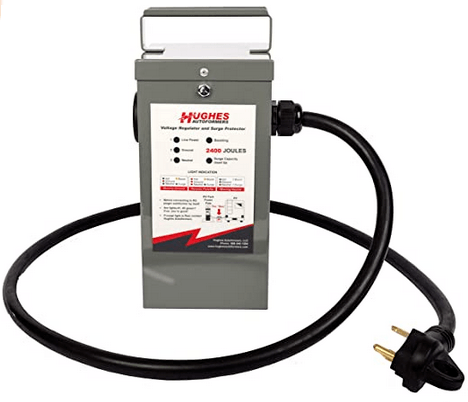 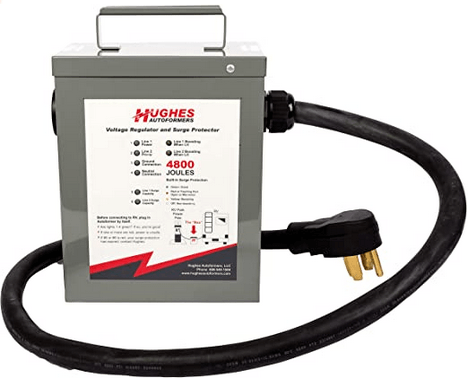 Hughes works to create a buffer between the electric pole and the RV.

It constantly monitors power levels to prevent spikes and surges. Plus, when it detects a low voltage situation, the Hughes Autoformer boosts the power coming into the RV to ensure a stable energy load.

Using the device is as simple as plugging it into the park's power pole, and plugging the RV into the autoformer.

One common misconception campground owners have is that the devices work to pull power away from the park.

The company told me that's not the case, and actually protects the park by lowering the number of amps required by the RV since the device increases the voltage available.

HughesAutoformer.com notes "What it is doing is changing the voltage – amperage relationship, lowering the amperage and raising the voltage. Since appliances run better on higher voltage, lower amperage, less overall power is used from the park, and better service is enjoyed from your RV."

Still, expect some push back from RV park owners who don't understand how it works. In fact, some parks prohibit the use of autoformers entirely.

The biggest benefit for using the Autoformer is for RVs with 30-amp power supplies.

The device allows some additional appliances to be run on a 30-amp connection because the autoformer will boost the wattage availble to run the appliances without requiring more power from the park.

Hughes Autoformer is heavy, about 35 pounds, but doesn't take up a lot of space in a storage compartment.

The included power cord is long enough for the device to sit on the ground and reach the power receptacle.

It also comes with a lock to keep the device secured to the power pole.

Hughes Autoformer is a must-have for any RVer who frequents parks and wants to ensure that their rig and electronics are protected and secure.

Get more information on the 30 Amp Hughes Autoformer

Get more information on the 50 Amp Hughes Autoformer

My camper is on a permanent site and this year we are having issues with voltage. My voltage at times was so low my surge/voltage protector would constantly shut my camper off at 102 volts. When I ordered Hughes Autoformers RV2130-SP I had my doubts that it would actually work but after reading other reviews I decided to give it a try. I’ve been using it for about a week now and with high temperatures the AC runs all the time. With the voltage booster, I am between 116 and 122 volts. I can now use all the appliances and still run the AC. I am very happy with my decision to purchase the Voltage Booster and highly recommend it to anyone.

Hughes Autoformers saved my bacon! We were having record high temps in Florida. The park I am currently in is a brand new park but one leg of the voltage always read low, usually low 100s. During the peak heat times, the suspect leg would drop below 102 which causes my EMS to cut power to the rig. Having this Autoformer boosted the bad leg to an operable voltage and keeps us cool! Turned out to be a power company issue that took 3 weeks to repair. This was an expensive purchase however sometimes you get what you pay for. Very very pleased with it.